Canyonlands: Land of the giants

Canyonlands: Land of the giants 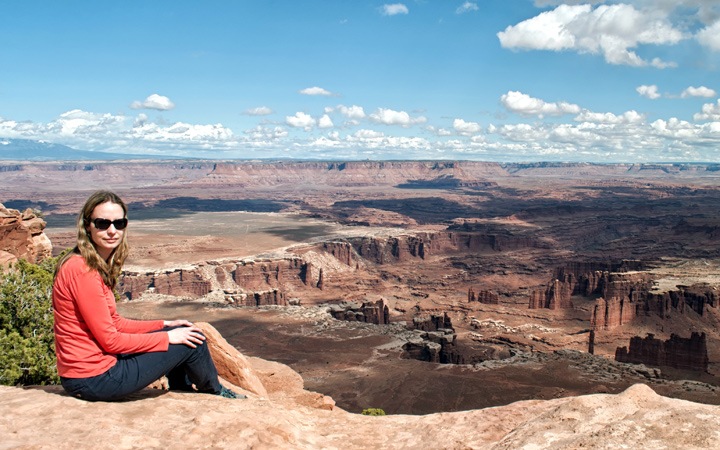 Utah’s biggest national park, Canyonlands was also the park on my road trip route that I knew the least about. I’d seen plenty of photos of Arches, the hoodoos at Bryce Canyon and Zion‘s red rocks, but what about Canyonlands? It gets less than half the number of visitors of nearby Arches and a tenth of the number that visit Zion, but if you bypass this one you’ll be missing out. Of all the parks we visited, Canyonlands had the most breathtaking views. Literally if you’re afraid of heights – the edge of the mesa top here drops 1000 feet straight down from the viewpoints. Way below you can see a miniature-looking landscapes of gorges, pinnacles and jutting needles of rock, carved out by the Colorado and Green Rivers. 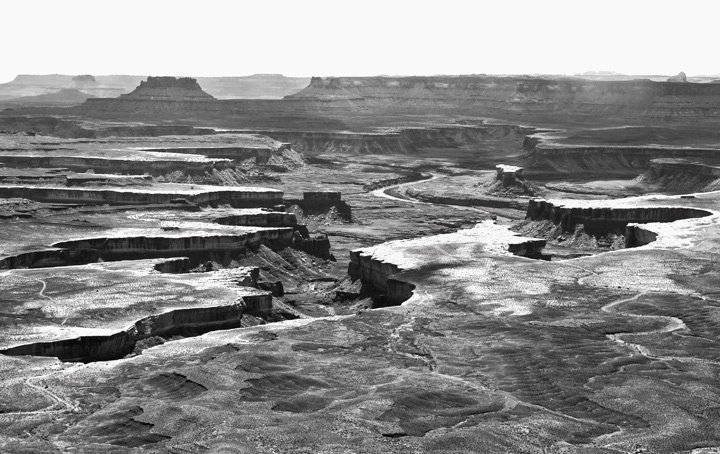 Looking down from the Island in the Sky

Canyonlands is actually three different parks in one, with three separate districts, each with their own entrance and a good few hours drive between them. The Needles and the Maze are the more extreme districts, with hiking trails spread out over a wide area connected by rough dirt roads. So with our limited time we stuck to the Island in the Sky district, the easiest to get around and the closest to Moab. It’s appropriately named, as the with the steep drops all around the plateau you feel like you’re marooned on an island of rock. The main way to see Island in the Sky is by following the road around a series of overlooks, each of which gives you a different perspective on Canyonlands’ spectacular landscape. 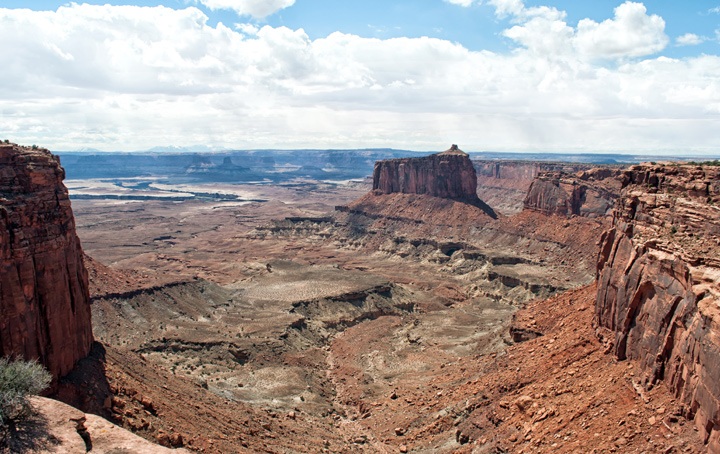 Layers of rock visible from the mesa top

Our first stop was at Upheaval Dome. This is the eroded remains of a huge dome where the layers of rock have been twisted and bent. There are two theories on how it was formed, either by a thick layer of buried salt moving up or more excitingly by a meteorite striking the earth. You need to take a short walk out over the rocks to see the views (about 1 mile/30 minutes return). There’s not as much hiking in this part of Canyonlands as there is in some of the other National Parks, other than the short walks around the outlooks you’ll need to head down into the valley or to the Needles or the Maze for the serious hiking. 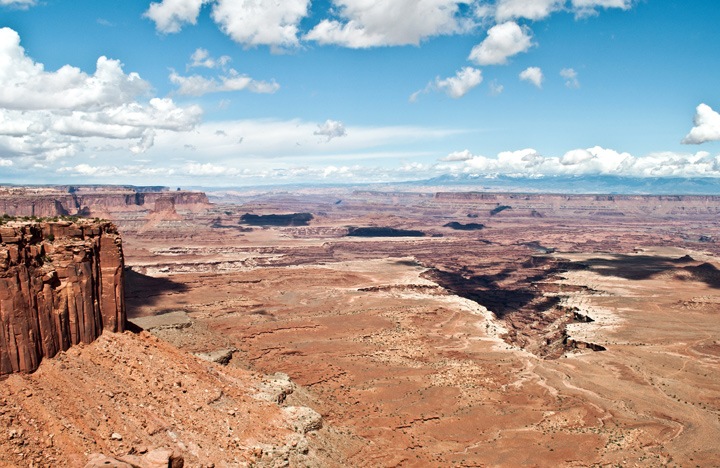 From here we went on to the White Rim and Green River Outlooks, where you start to get a real feel for how high up you are and how steeply the land drops away. The Colorado and Green Rivers have both cut deep down into the rock over millions of years. Even from the bottom it’s another 1000 feet drop down again before you get to the riverbed. It’s hard to get an idea of the scale just from looking at the photographs, but if you can see what looks like tiny lines running across the land, those are roads, with the occasional ant-sized car crawling along them. 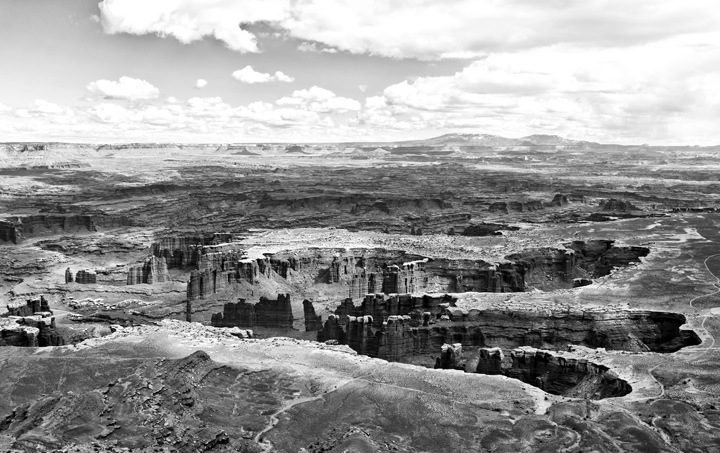 Gorges – or is it a giant dinosaur footprint?

Our final stop was Grand View Point Overlook, where the gorges down below looked like the shape of a footprint of a giant dinosaur. Smaller, real-life dinosaur footprints have been found in the park too. So you’ve got panoramic views, meteorites and dinosaurs, all in the same park – anywhere else it would be packed with visitors, but in Utah it’s just another landscape in a state overflowing with natural beauty.

Canyonlands National Park is located in southeast Utah. There are several entrances to the different parts of the park – Island in the Sky is the most accessible and is about 10 miles north of Moab. Entry (which covers the Needles and the Maze too) costs $25 per car (or $10 per person on foot/bike) and is valid for a week, or it’s free with a National Parks Pass. You really need to have a car to get around the park, and for the Needles and the Maze it’s preferable to have a 4WD.