The beauty of Bryce Canyon, Utah

The beauty of Bryce Canyon, Utah 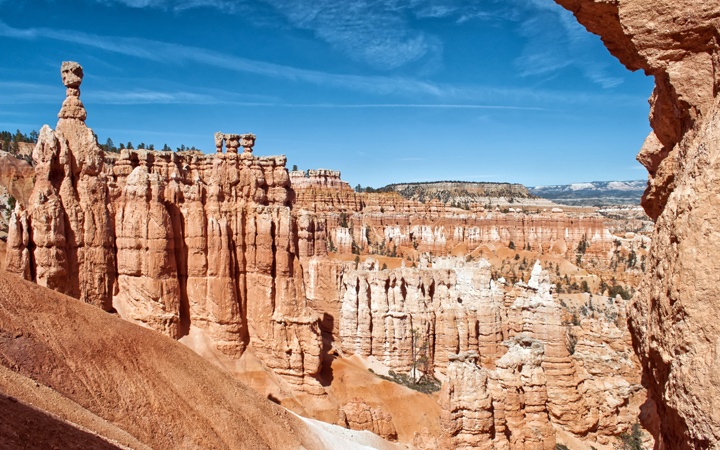 A land of delicately carved rock spires in sunset shades, Bryce Canyon was an out-of-this-world start to my southwest US national park hopping. The park is made up of a series of amphitheatres along the edge of a plateau, filled with thousands of rock formations called hoodoos

They’re formed when the limestone is eroded by wind, frost and rain, shaping it into in assortment of canyons, fins, arches and spires. Iron oxide in the rock gives it a vivid red, orange or yellows tint. Well that’s the science, but looking at the twisted shapes you can see why the early Paiute Indians thought the hoodoos were people who’d been frozen into rock by an evil spirit.

The canyon gets its name from Ebenezer Bryce, a Mormon pioneer and shipbuilder who settled in the valley in 1870. He built roads and started off the settlement here, but was notoriously uneffusive about his spectacular home, describing it as “a hell of a place to lose a cow”. 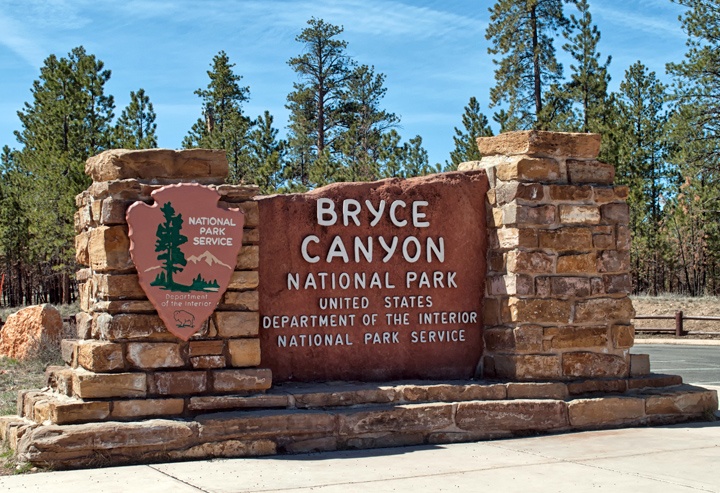 The entrance into the National Park

Bryce Canyon’s landscape is built for outdoor adventures, with a series of overlooks and trails along the top of the rim. On a clear day you can see over 150 miles because of the high altitude and clear air. You can feel the altitude in other ways too; the viewpoints are up at around 8000–9000 feet high, so even on a sunny mid-April day there were spots of snow among the rocks and out of the sun I was glad to have my fleece.

The viewpoints are strung out along a 18-mile scenic road which runs along the plateau rim. When you arrive into the park you get given a map and brochure with details of all the different stops and the trailheads for the hikes around the park, so you can plan your visit. We started off by following the road into the Bryce Amphitheater area, where the biggest concentration of viewpoints are. 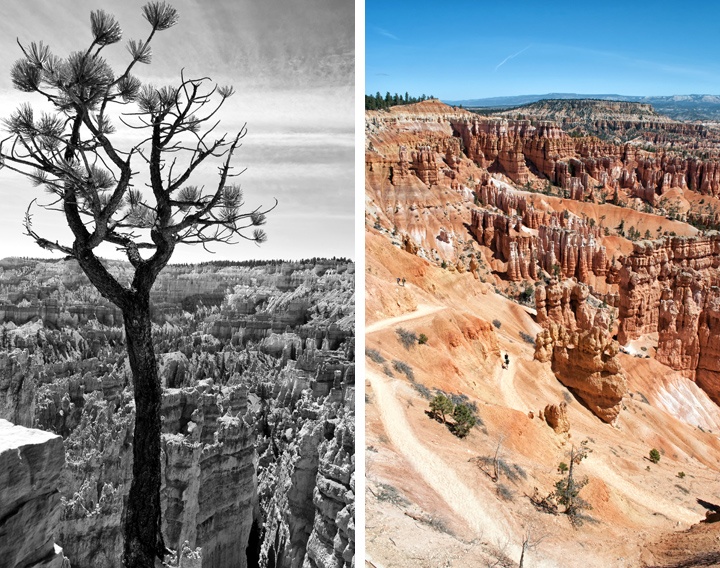 The views from our first stop at Sunset Point

Our first stop was at Sunset and Sunrise Points. Despite not being there at the right time of day for either of them, my first views down into the canyon still took my breath away. From up here the hoodoos look like a maze of tightly packed pinnacles of rock below you. On a stunningly clear day the bright terracotta colours of the rocks popped out against the brilliant blue skies.

It almost doesn’t look real, like someone’s carved out these intricate patterns in the rock. This area’s called the Silent City, and you can almost picture a hidden civilisation living down there. A mile-long section of the Rim Trail links Sunrise and Sunset points and had some of my favourite views. The whole trail is 5.5 miles long and runs along the mostly flat rim of the canyon between Fairyland Point and Bryce Point. 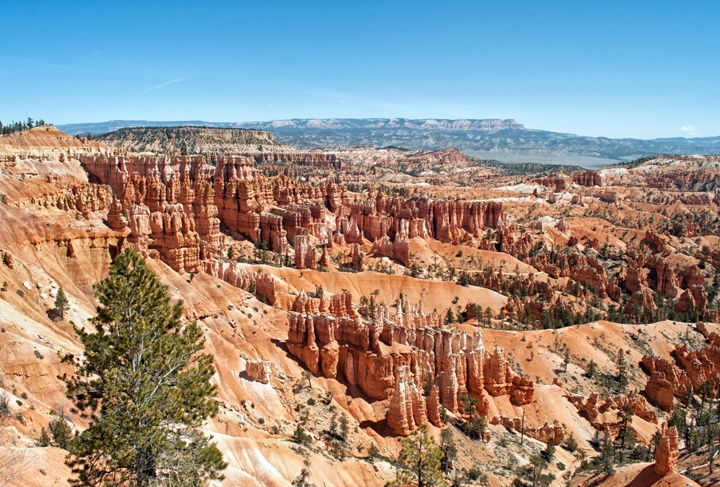 Views from the Rim Trail between Sunset and Sunrise Points

After retracing our steps back to Sunset Point, we drove on to the next viewpoint at Inspiration Point. There are three different viewing levels here, perched on the edge of a cliff which drops off steeply. A few pine trees cling on desperately to the edge. Although it might look dry and barren there’s a lot of plant and animal life in the canyon. There lizards everywhere and squirrels, chipmunks and prairie dogs are pretty common, but you have to get very lucky to spot the canyon’s rare mountain lion. 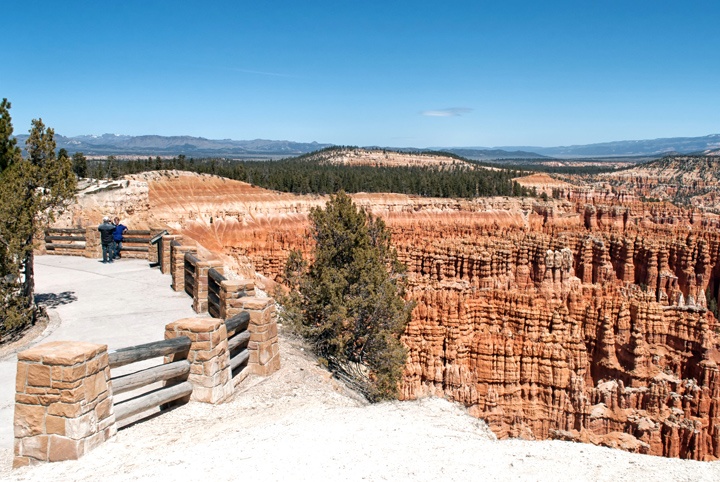 Further on again is Bryce Point, with one of the most panoramic viewpoints from a platform overhanging the canyon. You can see for miles and totally lose all sense of scale – the hoodoos below look as tiny as ant hills though they can reach 200 feet high. At sunrise here the sun’s rays touch the tips of the hoodoos first, making them look like they’re on fire, before spreading down into the canyon. After Bryce Point and nearby Paria View you’ve reached the end of the Bryce Amphitheater. The landscape changes from pine to spruce forest south of here and the viewpoints get a lot more spread out. 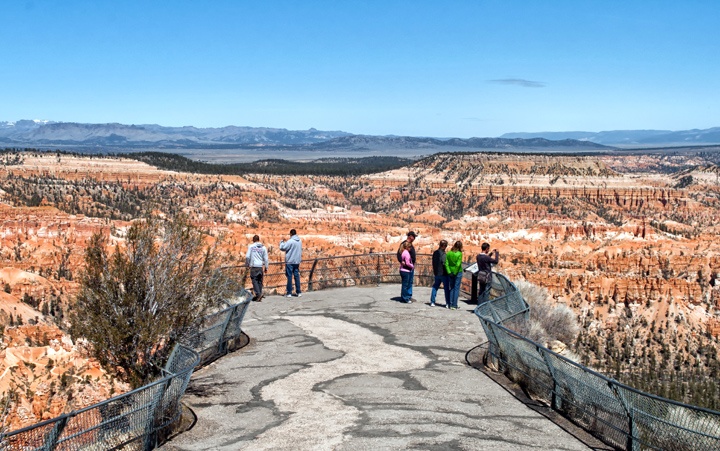 At the far end of the park is the highest viewpoint, Rainbow Point. At this end the views are much more open, and you can see for hundreds of miles across to the hills of the Kaibab Plateau where the North Rim of the Grand Canyon lies. You get a better idea of the geology here too. The area is called the Grand Staircase and you can see the different coloured rock that make up each ‘step’. Also at this end of the park is the arch at Natural Bridge and two towering hoodoos at Agua Canyon 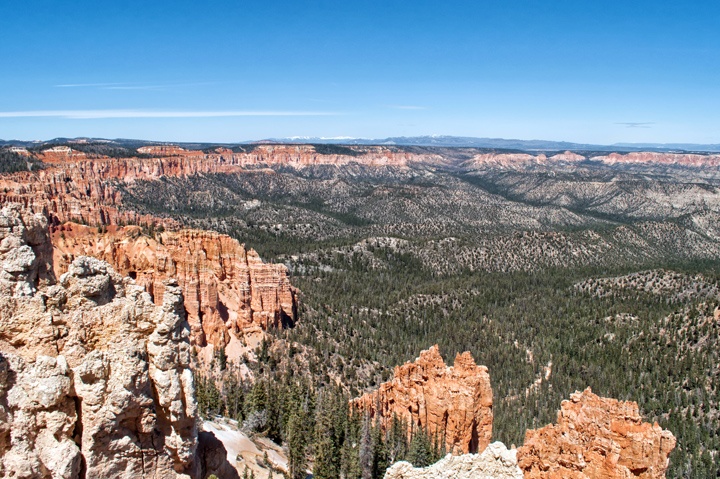 As well as the overlooks and viewpoints along the plateau, there are several hiking trails which take you into the canyon. Even though I’m not much of a hiker, I wanted to get in among the hoodoos and see them from a different perspective. So we headed back to Sunset Point to the start of the Navajo Loop Trail

A sandy path leads steeply downhill and we were soon absorbed into the Silent City. The trail’s only 1.5 miles long but has some steep patches and you’ll need to carry plenty of water. It’s worth the effort though as close up you can see the intricate detail of the patterns that erosion has left on the hoodoos. 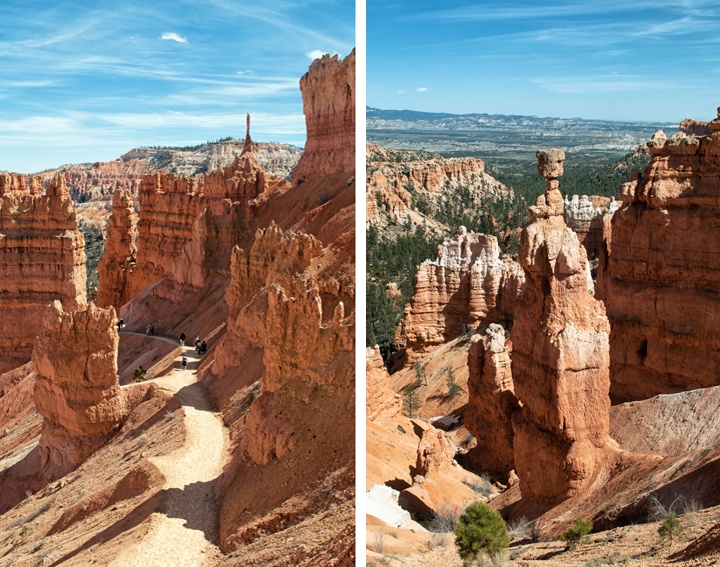 Among the hoodoos on the Navajo Loop Trail, with Thor’s Hammer on the right

Patches of harder rock mean you get strange formations like the hammer shape of Thor’s Hammer. The colours are a lot more varied that they look from above too, with patches of purple and brown among the reds and yellows. The trail leads on past the towering limestone ‘skyscrapers’ of the narrow slot canyon named Wall Street

Down here you finally appreciate the huge scale of the hoodoos – some of the Wall Street towers can be up to 20 storeys high. It’s a magical landscape and like nothing I’ve ever seen before. You can’t help agree with Ebenezer – cow or no cow, Bryce Canyon is still one hell of a place.

Climbing back up the Navajo Loop Trail

Bryce Canyon National Park is in southern Utah, near the small town of Tropic, about a 4.5-hour drive from Las Vegas or Salt Lake City. Entry costs $30 per car (or $15 on foot/bike) and is valid for a week, or it’s free with a National Parks Pass. There’s a shuttle service around the park from late April to October, running every 10–20 minutes from 8am to 7pm (6pm in May and September) – it’s not compulsory but helps reduce congestion.